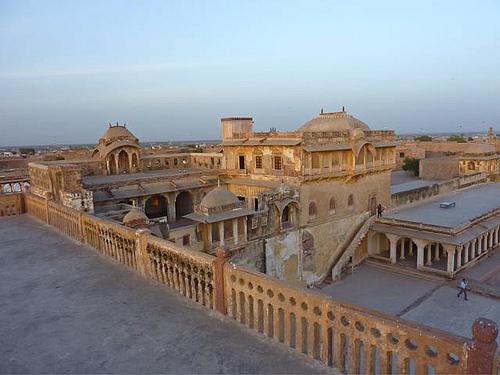 Nagaur is major city in the state of Rajashtan lying in between the famous cities of Bikaner and Jodhpur. As per the historians, Nagaur is considered to be an ancient city from the Mahabharata era. It is said that it's the part of the Ahichhatrapur which was captured by Arjuna and given to his teacher, Guru Dronacharya as s token of respect. Today, Nagaur is a big commercial city in Rajasthan and mostly appears as a transaction point for people and cargo travelling from the major cities of the state.

History of Nagaur
Nagaur has deep history which dates back to more than 4th century BC, when Nagas ruled the region. Then it was known as Naga-pur, hence - Nagaur. During the start of 7th century, the Chauhans becames the rulers of the region. This was followed by years of Muslim and Arab invasions by the the middle eastern countries. It was until when Rajputs claimed the bragging rights in the region, anarchy came to rest.

Nagaur was also known as 'Jangaldesh', as a result of rulers of Bikaner capturing the majority of area in the Jangla country and were entitled as 'Jai Jangaldhar Badshah'. This was the time, when trade routes began to emerge and traders from the inner regions of the country began to cross the Indus regions. Nagaur was also the seat of sufisim and when Khwaja Moinuudin Chisti established himself in Ajmer, one of his disciple, Hamiduddin began working in Nagaur.

During the end of medival era, lot of rulers were fighting for superemacy in the region including, the Rajputs, the Marwars, Bhatis, Muslim Kings and even the Mughals. This run ended when the British landed in the subcontinet.

Getting There
Nagaur is easily accessible from major cities of Rajasthan like Bikaner, Jaipur, Jodhpur, Jaisalmer and more.