The administrative headquarters of the district of Nagaur in Rajasthan – the city of Nagaur – is one of the most breathtakingly beautiful desert cities located on the western front of the country. The city finds mention as ‘Naga-Pur’ in Mahabharata and is associated with many tales of the bravery of the Rajpur rulers of Rajasthan. Let me, through this article, take the readers on a merry ride of the various aspects of tourism in the city.

Places to Visit in Nagaur 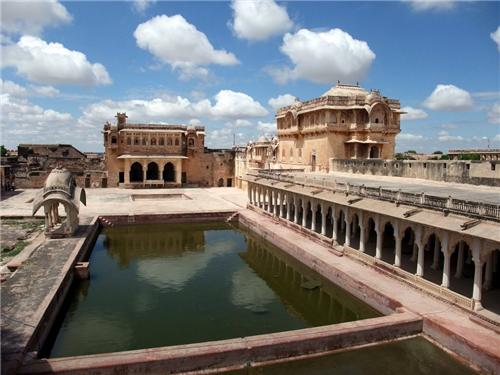 Popularly known as the Fort of the Hooded Cobra or Ahhichatragarh, the Nagaur Fort has long been regarded as one of the exemplary pieces of architecture born out of the combination of Mughal and Rajput styles. The Fort has witnesses many changes in architecture over the centuries, and one of the most contemporary renovations exercises was performed on it in 2007. A popular Sufi music festival is held here on an annual basis.

Ladnun is the popular name given to the historically famous city of Old Chanderi Nagar, which is considered to be a repository of ancient Jain temples. It is believed that this place was one of the first of the many centres chosen by the Jain gurus, for practice of Ahimsa.

This is one of the most incomprehensibly inaccessible places to visit in Nagaur, but it has attracted tourists like no other tourist site, during the last few decades. The Fort is well known for its location on the top of a hill, offering one of the best views of the city of Nagaur; besides, it is also famous for its unique water harvesting system. Mythical tales mention that Rajpur rulers of the yesteryears used the Fort as a safe location for minting their repositories of gold and silver.

This was a 500 year old piece of heritage, located right at the heart of the Thar Desert, before it was converted into a modern hotel recently. Khinvsar is located more than 40 kilometers away from the center of Nagaur, on the National Highway connecting the city with Jaipur. The history of the Mughal empire mentions that Khinvsar used to be the resting place for Emperor Aurangzeb. A number of small temples are located in this area.

Better known as the Goth-Manglod Temple, this is one of the oldest temples that still exists in the district of Nagaur, believed to have been constructed in the 4th century during the rule of the Gupta Dynasty. It is located at a distance of 38 kilometres from Nagaur, and is believed to have been the sacred place of worship for the Dadhich Brahmins of Rajasthan.

This is one of the most famous Dargahs found in Rajasthan, with its majestic beauty next only to the Ajmer Dargah. The Jain and Sufi community have considered this places as sacred for centuries; there is Jain Temple housed here, made of glass, and possessing an imposing architecture.

Even though railways are the most popular mode of transport in the country, chosen by tourists to reach Nagaur, you must have your plans made well in advance, keeping in mind the fact that trains travelling to and fro Nagaur are generally found overbooked, throughout the year. Jaipur, Jodhpur, Delhi and Bikaner are some of the most important nearby cities having direct connectivity to Nagaur via railways. The Nagaur Railway Station serves as the link between the city and the rest of the country, via the Indian Railways.

Rajasthan State Transport Corporation is the flagship government entity operating a fleet of tourist buses from Nagaur to various nearby cities like Bikaner, Jaipur and Delhi. The National Highways connecting Nagaur to the other parts of the country have significantly ramped up road transport in this part of the country.